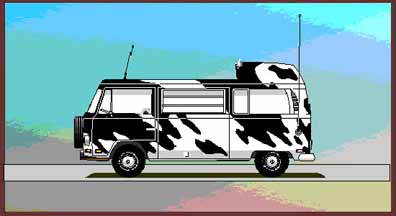 ON AND OFF THE ROAD WITH RON

I like to travel around. No, I’m not talking about going to Disneyland. I’m not talking about roughing it at Club Med. I’m not even interested in National Parks, State Parks, City Parks or even KOA’s. I like to go places where there are no brochures touting the wonders of the place; I don’t have to be sold on the scenery. To me, a lack of signs listing rules and the non-existence of yellow paint indicating where to park are very important. I already know how to park, how to not leave a mess behind and my dog understands the command "sit".

I like a place where just by looking at it, it meets my internal spiritual requirements. I like places where I am the only one there. I like places where I can see a long, long way. Ridge tops and deserts meet this requirement quite nicely. If I do happen to be in a place that is somewhat enclosed I like to have a lake or a brook or unusual geological feature handy. Amazingly, there are plenty of these places around.

I think that a lot of people have never learned how to camp, or if they did know how to camp they have now gotten older and decided that it might be too uncomfortable or unsafe. Now they'd rather go to resorts to be waited on hand and foot, or they buy huge motor homes with every convenience and security device ever invented.

This is great. It gives me hope when I see long lines at the entrances to National Parks and motor homes cheek-by-jowl in KOA Kamps. I then know they are not going where I’m headed and because of the size of their vehicle, they couldn’t get there even if they wanted to. When it comes to motor homes, bigger is better, I always say.

To you few folks who happen to be of a like mind, let me tout the virtues of the 20-year old VW Bus. An old bus is roomy enough for two good friends. The older busses are simple mechanically and thus require simple tools. They have a high ground clearance and a narrow wheel base which allows them to get into places even a Hum-V can’t enter.

Okay. Have I weeded out a bunch of readers? Are we getting down to the hard-core group now?

Oh, good. Let me describe some of the places I like to go.

There is a place over by Mono Lake where I camped one September. Beautiful. Long needle pines. Lots of obsidian. Long views out and down across the lake and off to the distant mountains. Only five miles away a warm spring to soak in and watch the moon rise before heading back to camp and an absolutely quiet night except for the breeze in the pines. In the morning I had some redwood splits and cypress firewood left over--I'd been hauling them around--so I left them for the next camper. The following June I was back in the area and decided to camp in my old spot. There the redwood and cypress sat, just like I had left them nine months earlier. Not a soul had been to that beautiful spot.

It is places like that that give me hope as the rest of humanity crowds ever closer and closer in upon itself.

How do I find places like that? Well, like I said at the start of this, I like to travel. Usually, during the day I’m driving, heading for someplace several days and hundreds of miles away. Around four in the afternoon, maybe five, I will start watching for side roads. If I’m traveling along a river, usually there is a passable rut down to it. Fishermen, you know. Access.

Some places the highway has been straightened, improved and the old highway still remains unused and off the beaten path. These are good.

Believe it or not, clear cuts. Old logging roads usually lead up to some old landing and have incredible views if you don’t mind huge old-growth stumps and slash in the foreground. Just don’t go up an active logging road where the gate is open and the lock's just waiting to be snapped shut at dark.

Highway "borrow" pits, where the road construction crews have dug out gravel, are good for the night. When we traveled through the Yukon, borrow pits turned out to be great places to call it a night because they were open and a breeze helped keep the mosquitoes at bay.

BLM land is wonderful. A DeLorme map helps a lot in sorting out where all the various roads go. We were able to figure out the maze in North Death Valley from Last Chance Mountains down to Crankshaft Crossing and up and out to a highway in Nevada. Many miles and mines and lots of abandoned mining equipment to inspect along the way.

I have been stuck in soft sand many times and have yet to call a tow truck--that is, if I could even find a phone. Fat tires help a lot and when even that fails, make them fatter by letting the air out until they are down around ten pounds. It is surprising what a difference that makes. Just remember to always carry a tire pump along. A shovel, axe, come-a-long and tow strap are added insurance.

Although I do "free camp" I willingly pay a fee. When I end up camping in an area that has been previously used by campers, I clean up their mess and either bury it or haul it out. It’s the least I can do for our enjoyment, environment, and others that may come along.

Next time why don’t we talk about camping in and around Northern California. I know a few spots.