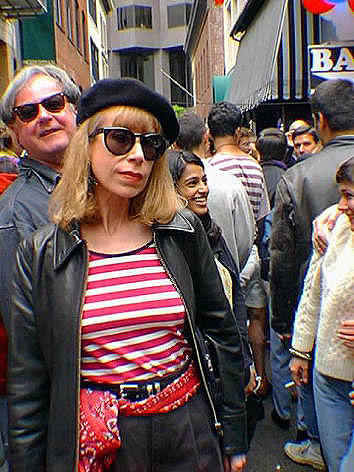 Bastille Day in France celebrates the destruction of the Bastille prison, built in 1370 and used by French royalty during the 17th and 18th to imprison political enemies. It is to this day a day of intense partying in the City of Paris.

San Francisco does not have a huge French population, but as a party town of considerable renown it did its best to bring the spirit of that day to life.

Just off Bush in downtown San Francisco, Cafe Bastille on Beldon Place and Cafe Claude on Claude Lane both threw block parties with wine, music, and food. And both drew crowds which, if not entirely French, acted like they wanted to be.

Max from France called it a small event in San Francisco. "There are very few French people," she said. "But the music is interesting. It is French disco." She attended the 4th of July celebration in San Francisco, which she called "so-so."

Despite "reserve francais," she appeared to be enjoying herself.

Patricia Vossough, who grew up in France and now lives in Mountain View, came up to the city to celebrate at Cafe Bastille. 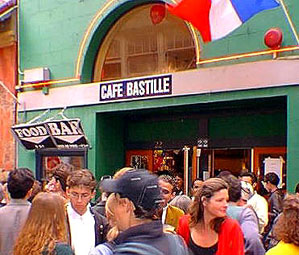 She agreed with Max's assessment that there were few French at the celebration: "Where are the French people?" she asked.

It is a huge celebration in Paris, said Vossough. "Everywhere in Paris they have the 'feu d'artifice,' the fireworks," she said. And it is crowded on the streets.

Comparing Bastille Day in Paris to the 4th of July in San Francisco, Vossough said, "It is more intense. That night everybody's in the street, everybody's out in restaurants . . . ." And the party goes on all night.

She said that here it is mostly fireworks--an event--whereas in Paris it is a whole celebration. "You feel it more." Still, in the narrow streets around Cafe Bastille and Cafe Claude, with wine, music, and a youthful crowd, intensity is present. It is clear that San Franciscans still know how to party. 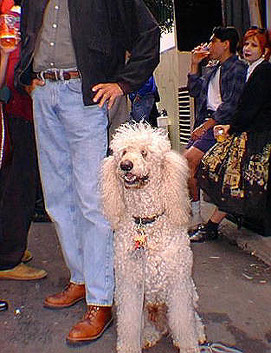